Fabergé is one of the world’s most recognised luxury brand names, underscored by a well-documented and globally respected heritage.

Fabergé achieved revenues of USD7.1 million in the year to 31 December 2020.

Fabergé is one of the world’s most recognised luxury brand names, underscored by a well-documented and globally respected heritage. As a wholly owned subsidiary of Gemfields, Fabergé provides direct access to the end-consumer of coloured gemstones through directly operated boutiques and international wholesale partners, and boosts the international presence and perception of coloured gemstones through its consumer-focussed marketing campaigns.

For the year to 31 December 2020, Fabergé directly operated three points of sale: a by-appointment boutique at group HQ in London; a concession in Harrods Fine Jewellery Room, London; and a stand-alone boutique located in The Galleria Mall, Houston, Texas, United States of America (“USA”), the state’s premier retail destination.

Today, Fabergé continues to explore ‘A Life in Colour’, pushing the boundaries of artistry and craftsmanship with the use of coloured gemstones, enamels and innovative techniques. Fabergé works closely, but not exclusively, with Gemfields when sourcing exceptional coloured gemstones for its contemporary jewellery collections. The relationship between Gemfields and Fabergé will continue to grow over the coming years, exemplifying our mine and market strategy. 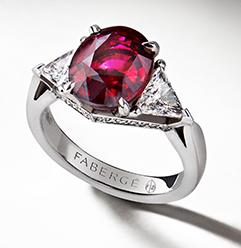 Operating costs reduced overall by USD2.2 million against the prior year in response to the Covid-19 crisis and associated temporary decline in sales

During the period Fabergé returned to the Doha Jewellery and Watch exhibition, Doha, Qatar for its 8th consecutive year, operated a 3rd consecutive, successful trunk show in Singapore and a coloured gemstone focused event with the high-status department store Wako which is located in Ginza, Tokyo, Japan.

Fabergé also secured its participation at the exclusive Watches and Wonders Exhibition 2020 (formerly known as the Salon International de la Haute Horlogerie) a tremendous and exciting achievement to have been invited to participate in the industry’s most exclusive and elite tradeshow.

Fabergé’s development has continued with the opening of a new boutique in Houston. The luxury brand is focussing on achieving sustainable profitability for the business on a stand-alone basis.

Parties of good standing are invited to apply to Fabergé regarding participation in its programme for Fabergé Inventory Partners (“FIPs”). In short, FIPs pay the cost price of mutually agreed items of jewellery and participate in 50% of the upside. For more information please click here.

Fabergé will continue to increase its digital presence, with a greater focus on social media platforms given the reach, adaptability and measurability offered by that medium. Coloured gemstone-set, fine-jewellery collections will remain at the heart of the campaign, allowing Fabergé to seek and utilise synergies with Gemfields’ marketing and to continue to promote the brand’s tagline: A Life in Colour.